Official Website of Kristina Meister, Author and Uber-Geek
Leave a comment
Posted by kristinameister on June 23, 2018 in Uncategorized 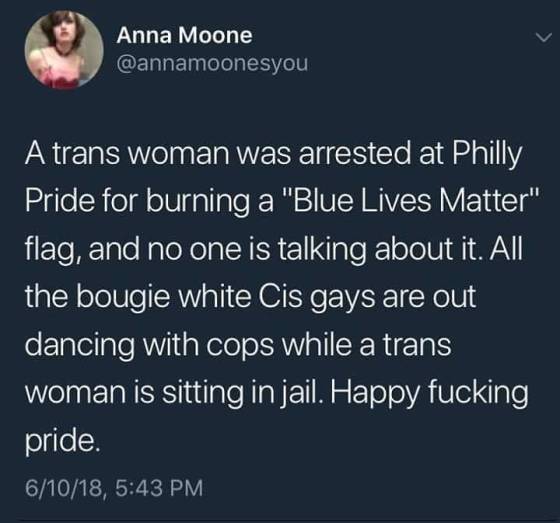 But arson is illegal. She was arrested because she committed a crime

an attorney literally said to what you have mentioned, “under this logic every cigarette in public is “arson” that is NOT how this works. THAT is NOT Arson

ARSON: arson is defined as the malicious burning of the dwelling of another. Please note that the definitions of “dwelling” and “of another” are the same as they are in the context of burglary. In order to be convicted of arson, a defendant must have actually caused some damage to a dwelling, using fire.

Lighting a cigarette is not the same as setting a flag on fire in a populated area. She was convicted of attempted arson & reckless endangerment of others. She was in the wrong

She was absolutely NOT “convicted” of anything she was arrested for the above, in which case the DA will facepalm and throw out the “arson” since arson  literally is defined as “intentionally setting fire with the intent to cause damage and having cause damage”  A flag is absolutely NOT a structure. She will be pleabargened with public disturbance.

watching haw many fucking 19 year old bootlicker idiots on hear scream arson, makes me have 0 confidence in the LGBTQ community as having staying power to overcome this administration…

Burning flags is protected under the 1st Amendment as political speech, flat out. The police violated her first amendment rights by jailing her for expressing a political opinion that is explicitly protected though legal precedent because they didn’t like being mocked.

Where are all the Status Quo Warriors that scream about Freeze Peach when a Nazi gets punched? Not here when this is literally the state trying to silence dissidence.