Official Website of Kristina Meister, Author and Uber-Geek
Leave a comment
Posted by kristinameister on December 2, 2017 in Uncategorized 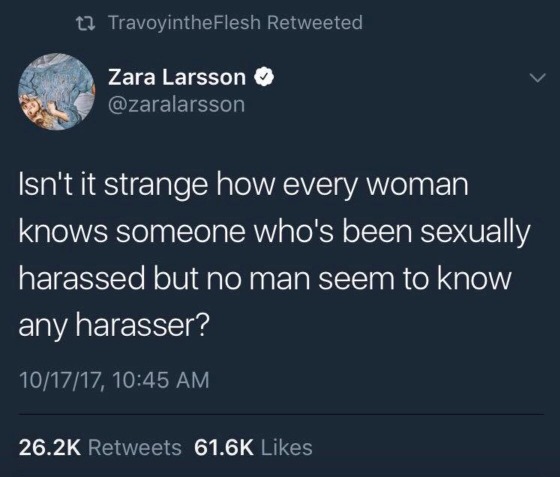 A male colleague was making fun of the #metoo movement a few days ago, and many more (I’m one of 5 women in a department of 200 men) joined in. So I raised my voice and said I was glad women were speaking up about sexual harassment and assault and that I hoped that everyone who perpetuated this toxic behavior got taken down.

“Yeah but it’s a trend now, lots of them are just saying it for their 15 minutes of fame.” He then continued to say that he didn’t know anyone who had been harassed or any man who had done it.

I asked him if he had a daughter. He did. I asked him how old she was. She was was 17. I told him I’d bet my rent money that his daughter had experienced sexual harassment.

The next day, he came in the office with five bouquets of flowers for all the women in our department, including me. He publicly apologized for making fun of sexual harassment and for making our lives harder by doing so. He said that he simply hadn’t known how widespread it was. Apparently, his daughter deals with it very regularly. She hadn’t told him because of the way he spoke about assault cases that were on the news. She thought he’d think less of her if she’d mention it. It was her idea that he should make a public announcement. He said he felt like a bad father.

I said: “You were. Same goes for everyone who laughed with you. Be better, now you know better. And educate other men that still think the same way you did yesterday. And next time someone tells you about an experience they have, don’t automatically assume that because you haven’t seen it, it’s not true. That kind of willful ignorance is why we still deal with this shit.”

He also offered to pay my rent as that was part of the bet, but I told him I’d rather have him put effort in being a person his daughter and wife could be proud of.

In conversation the other day my mom stopped and asked my dad about what percentage of women he thought had experienced sexual harassment. He said about 20-30% maybe. My mom told him that both of us had been harassed multiple times at work (same goes for both of her sisters) and that she had actually been assaulted by a groper on a public bus. I have never seen anyone’s face go slack so quickly before as he realized that literally every woman in his family had experienced this. And while I’m glad he believed us and has changed his view on that subject I still can’t shake the frustration, the anger, that it required being sat down and spoonfed these incidents that we didn’t particularly wanted to relive. This is something that women have been saying for years, but men just never listen. Not even when they’re forced to sit in mandatory harassment in the workplace training seminars.

One time in college, I was sitting at a lunch table and overheard a guy doing this kind of shit to a woman who was sitting with him. He was talking about how he was going to write a fucking book about how men get incorrectly accused of rape or harrassment. She was trying to argue with him, but he was shouting over her, and I could tell…just fucking see in how she was reacting that she was a rape survivor, but she couldn’t bring herself to talk about her own experience. I couldn’t fucking stand it anymore, this smug prick going on and on about how much he hated that women could do this, and how unfair men were treated. How it was all a big conspiracy.

I got up and slammed my tray down in front of him, right next to the girl.

She looked up at me. I was wearing leather pants and a purple tank top. Had black hair cut like Cleopatra. I leaned over the table and said, “I was raped when I was ten. You wanna say that shit again, mother fucker?”

I sat down. Smile at the girl. “Tell me, about all these men you think are being unfairly accused? Specifically. Tell me you know what it feels like to sit at a table minding your own business and hear some motherfucker shouting about how this thing you went through is completely fictitious. Tell me all the statistics and how the 85% of women who have been harassed or assaulted who report to the Women’s Crisis center every year are taking time out of their lives to get their jollies reporting this shit. You think women like to be treated with disrespect and told that they cannot say anything because some fucking pinprick little douche is going to deny it ever happened.”

“Look me in the eye and tell me I liked being held down by an 18 year old, while he fondled me. Tell me I liked looking over at my five year old sister and thinking ‘I have to let him or he’ll try to hurt her’. Tell me I’m lying, bitch. I fucking dare you. You think you know pain? You think those poor men are being falsely accused? Do you know how many times a man like you has grabbed my butt or my boobs? How many times a man has talked over me? How many times a man has discounted what I say by calling me a bitch? Because I have a vagina? Fuck you. Write your piece of shit book. But before you do, go over to the women’s crisis center and listen in on some of the shit you refuse to believe is real.”

She sat there and sniffled. He stuttered out some bullshit about knowing real statistics. She got up and said to me “Good luck sweetie” To which I said “Don’t have lunch with fucking douches”

And then I said “Yup, that’s what it feels like trying to tell men about sexual assault, you piece of shit. Now you know.”

That’s when I got up, bussed my tray, and walked outside. When I got there, there was another girl sitting on the retainer wall crying. I stopped to ask if she was okay, and she threw her arms around my neck and just hugged me for the longest time. And then she walked away like nothing had ever happened.

I had a class to go to, but instead I took a lap of the beach, and felt like a cold, fiery, fucking sun from the dead part of the universe, full of vengeance and pestilence and rage.

Fuck anybody who doesn’t listen. Fuck all you men who say it doesn’t happen. Fuck all you assholes who talk about 15 minutes. You have no idea what that 15 minutes feels like. Fuck all of you who won’t believe it because it isn’t you and you can’t see it.

It’s me and I see it, and if that isn’t good enough for you, you’ve made my point for me.

This post has served another purpose… it’s a great asshole detector. Blocked and blocked.

You mean the notes? Yeeaaahhhhh……….

“This post is bull shit” popped right out at me.