Official Website of Kristina Meister, Author and Uber-Geek
Leave a comment
Posted by kristinameister on July 17, 2017 in Uncategorized 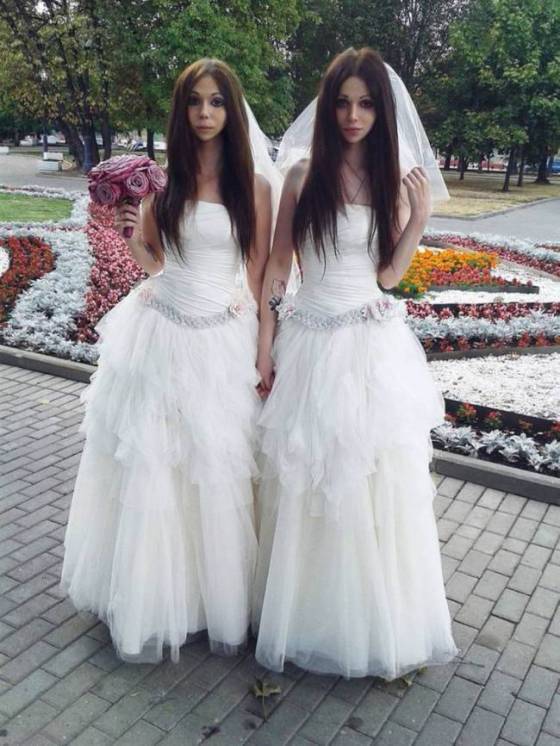 Two brides have become two of the most kickass women in the world by marrying to protest against homophobia in Russia.

As Davis is still legally regarded as male, the office had no choice but to hand them a marriage certificate.

The couple said officials chided them, and appeared to be violent.

‘She called us the shame of the family and said we need medical treatment … I was afraid my pussycat [an affectionate pet name in Russian] would beat the fuck out of her,’ Davis said on her VK page.

But the couple were allowed to sign the papers, meaning a gay couple in Russia are legally recognized as married – even if it’s through a loophole.

‘This is an important precedent for Russia,’ Davis said.

they are my heroes

Okay but other reports state that Alina identifies as androgyne but feels more comfortable as a woman, it definitely is trans excellence but the label she uses is not reported correctly here.

Thanks for the info! (This means it’s not only trans excellence but also NONBINARY EXCELLENCE YEAH!)

❤ They are both so fuckin AWESOME ❤

So proud of these awesome people right here, celebrating their love and also giving a massive “Fuck you” to the bigoted collection of thugs and criminals that make up the “Government” of Russia

This is some next level Greek mythology loophole heroics right here and I am ecstatic.

I approve of using bigots own stupidity against them 😀

Loopholes FTW, Loki would be proud!

Also is anyone else shit scared for them?

This is what I’ve been hoping to see. More of this.

← Previous Post
I am house-sitting and I am losing my fucking mind. →