Official Website of Kristina Meister, Author and Uber-Geek
Leave a comment
Posted by kristinameister on February 24, 2017 in Uncategorized 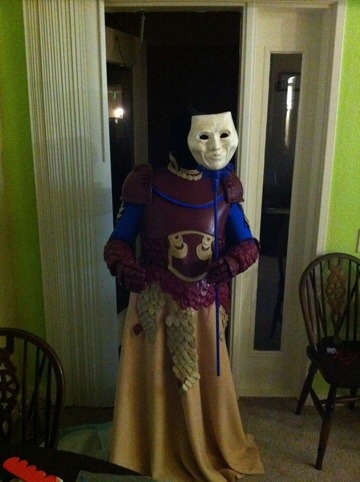 This is my headless Mysterious Stranger costume. It’s kind of hard to see but the upper half is entirely made out of plastic and Clay, and is a suit of armor mirroring the French style. The costume is a representation of the claymation character the mysterious stranger, from the claymation movie made in the 80s called “The Adventures of Mark Twain”. Do a YouTube search for the mysterious stranger, and you will be freaked out. So I decided I really needed to do this costume.

It took four months of eight hour/day labor, about $500, A shit load of ingenuity, and I diagrammed and documented the entire project. If you want to build a copy I have the tutorial on my website here:

This is the beginning of the tutorial, A series of entries, all linked by the tag Mysterious Stranger

I got a lot of really amazing reactions to it, lots of people who either knew exactly what it was and could not stop going “oh my god oh my god oh my god you’re the dude”, or they would shriek and run. One guy fell off his bicycle and ran across the street and started shouting at me that I was the devil and he needed to take my picture. When a group of kids walked by laughing at him he became very angry and said “you don’t know who this person is but he will ruin your life!”

It’s my favorite costume I’ve ever made and there are photos of each piece on the website. Also, this was made entirely by me- who is legally blind and who cannot see half of what she is doing.

So yeah, don’t let people tell you you can’t do something. Except driving. You probably shouldn’t drive blind.

I want to cry because this is so beautiful.

I want to scream because the Mysterious Stranger. *shudders*

Dude I even had a voice changer. I REKT people.

I also won prizes but meh.

I bow down as a humble beginning cosplayer to your Greatness.

“Also, this was made entirely by me- who is legally blind and who cannot see half of what she is doing.

So yeah, don’t let people tell you you can’t do something.”

The cosplay is just so friggin’ awesome too.

So, if you ever doubt yourself, remember… JUST DO IT!

LMAO I wish I had a better pic but I wanted the headlessness to translate. There are some pretty sick detail pics on my site showing each piece, which was hand painted.

← I’ve seen you say a couple times that you don’t see or that you’re disabled. Do you mind talking about it? I ask because I am an aspiring writer and it is really hard for me. I wanted to know how you managed or what it was like?
Next Post →