Official Website of Kristina Meister, Author and Uber-Geek
Leave a comment
Posted by kristinameister on February 22, 2017 in Uncategorized 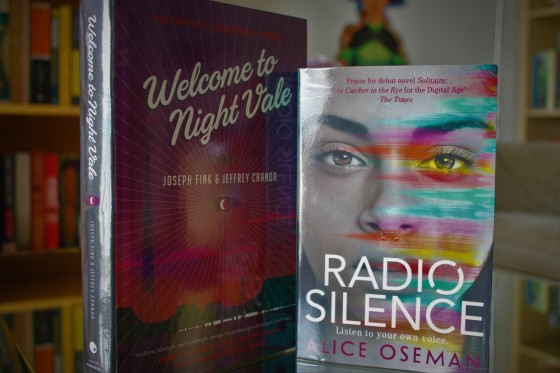 This is a PSA because I think it would be so terrible for WTNV fans to miss out on this amazing YA book, Radio Silence by Alice Oseman. It’s a book about a girl who got involved in her favourite fictional podcast and the author made no secret that the main inspiration for it is based on Welcome to Night Vale (the MC even has a WTNV poster in her room!). The author even had a paragraph in her acknowledgement page dedicated to Welcome to Night Vale.

Now, you may think that this sounds like a rip off of the podcast, especially if you read the description of the podcast in the book. But the best thing about the book is that it’s definitely captures the spirit of WTNV while telling its own unique story that most people can relate to: being true to who you are, realizing that what people want for you may not be the best thing for you, and finding your own people who can accept you for who you really are.

Furthermore, the book and characters are incredible diverse and when I say diverse, I mean really diverse:

1) MC is a bisexual mixed-race British/Ethiopian girl, and she uses the actual word “bisexual” to describe herself instead of the more ambiguous “I just like whoever I like.” Trust me, so many books would rather have their characters say that rather than to use the actual word. Also, the author did not use any love triangle to as a plot device to prove her bisexuality. She says she’s bisexual, so that should be enough.

2) There are two other gay characters and their sexuality was accepted without judgment, although there are discussions on why it’s not easy to come out to everyone.

3) Two of the characters (including the MC) are mixed POC and they have a discussion on how they regret not being in touch with their heritage due to being born in UK. Also another character is Indian and she’s more in tune with her cultural heritage.

4) All the main characters are NOT straight. Seriously, when was the last time you’ve read a good, well-written non-heteronormative book? Other than Francesca Lia Block’s brilliant Love in the Time of Global Warming of course.

5) The main character is Frances and Aled. A boy and a girl. THEY DID NOT FALL IN LOVE (this is not a spoiler, there is zero will-they-won’t-they plot). In fact, after we finished the Meet Cute scene there is a special chapter in page 85 where Frances gives the reader a heads up that they WON’T fall in love with each other just because she’s a girl who met a boy. Also Aled declared that he’s platonically in love with Frances and Frances thanks him for saying the boy-girl equivalent of No Homo. THEY’RE SO CUTE GUYS.

You would think that all of this makes the book preachy and try-hard but it’s not, these facts are just part of the characters and not shoved in the readers’ faces and incorporated to show that the world and the people in it is so diverse and does not fall within the trappings of society’s binary expectations.

I always wondered if I should find other podcasts to listen to other than Welcome to Night Vale, but the fact is there is nothing quite like Night Vale, with its truly diverse, female-friendly characters and incredibly clever plots. Similarly, I have never read anything quite like Radio Silence, and I hope to see more of this kind of writing and I’m forever thankful for WTNV for inspiring a generation of new voices that will not not be limited by the trapping of heteronormative, cliched storytelling.

← Previous Post
okay but what if all of the hp characters were queer?? →